Why Anglers flock to the Boyne Tannum Hookup? 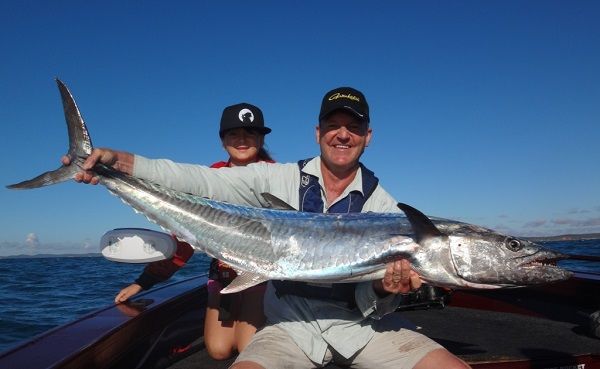 It is the meter plus saltwater barra capital 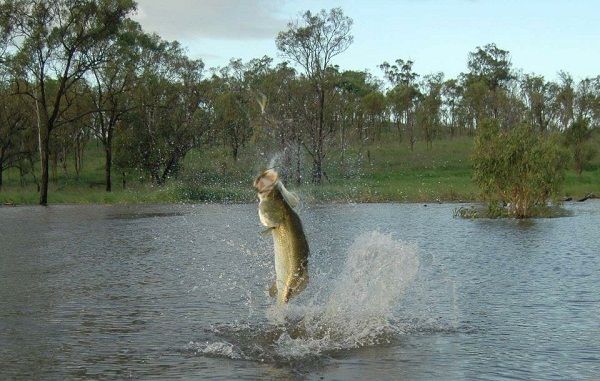 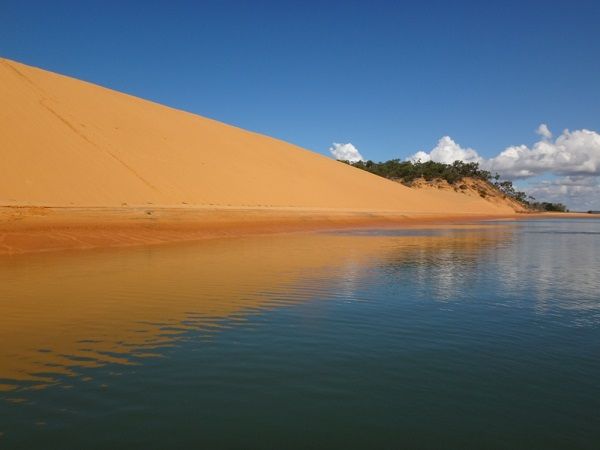 Yellow Patch is worth the trip 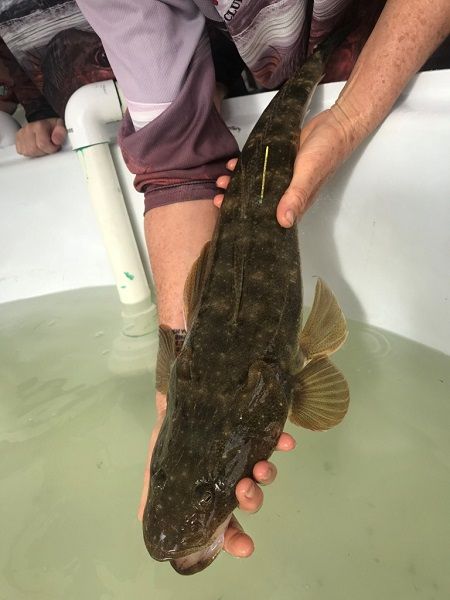 Live weigh in and tagging research in action 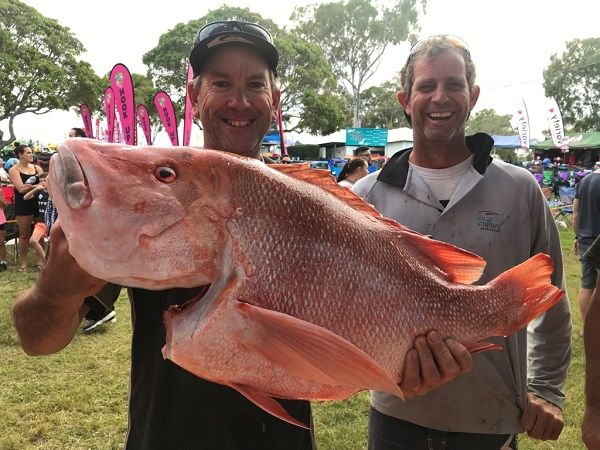 Big Red Emperor are weighed in 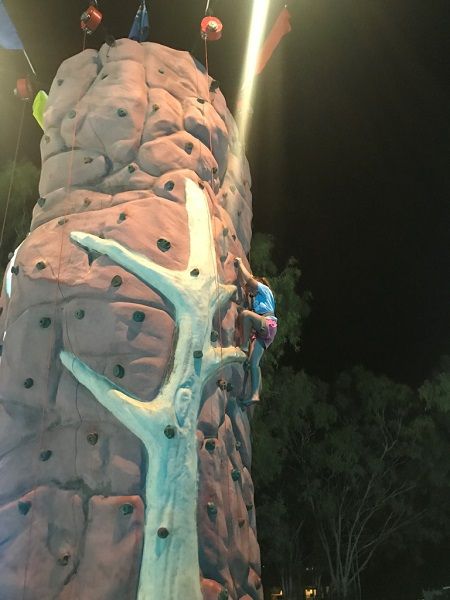 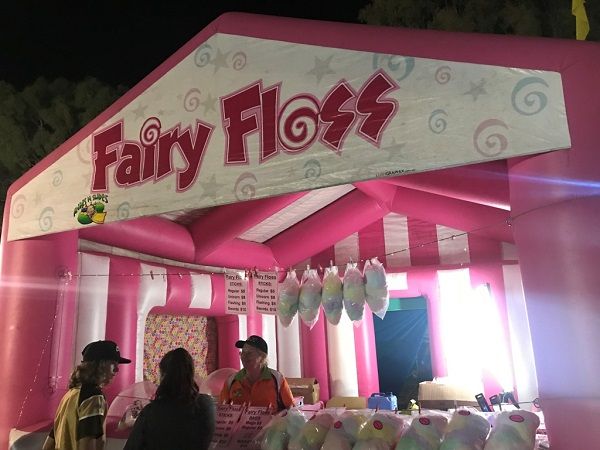 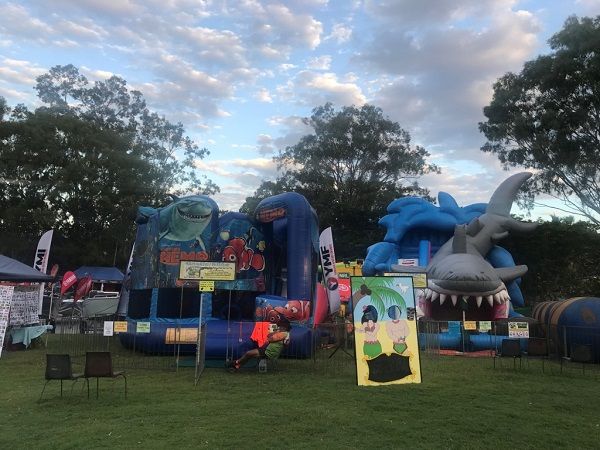 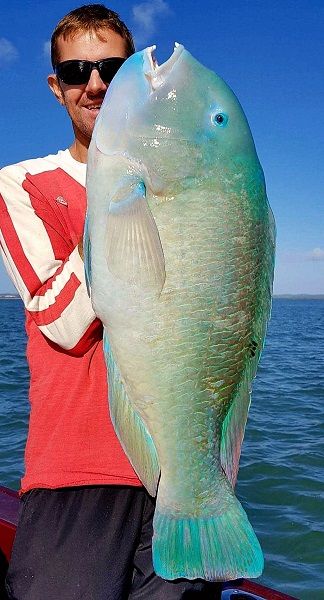 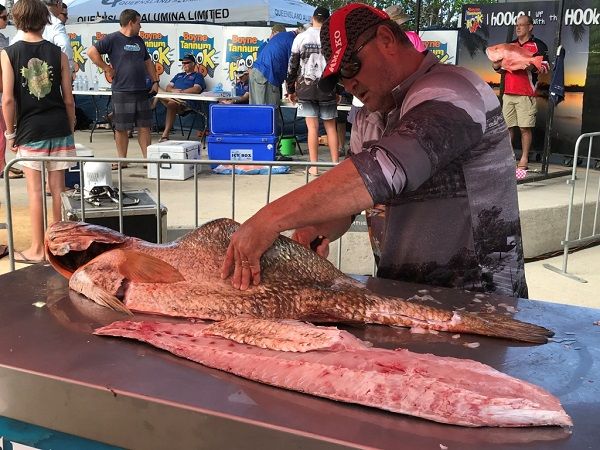 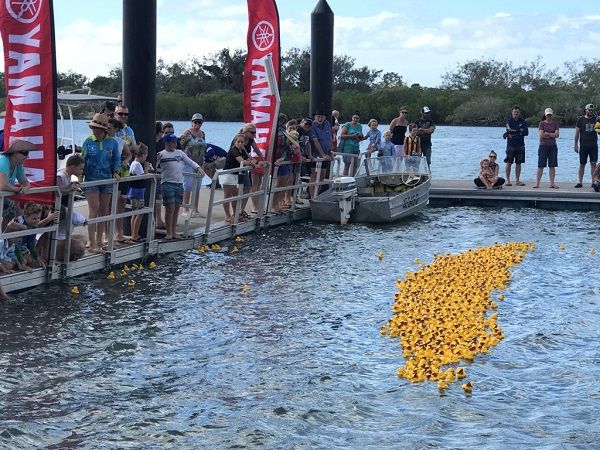 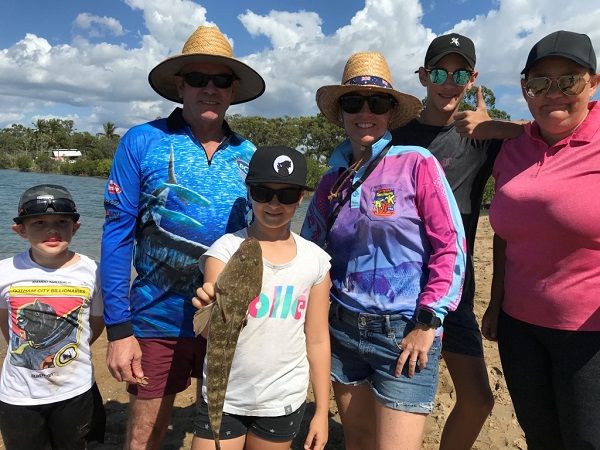 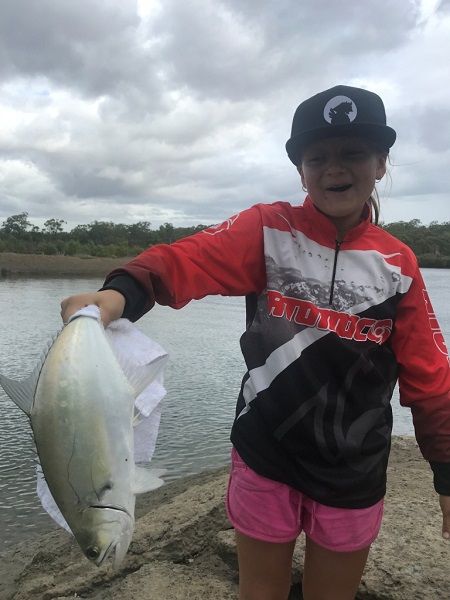 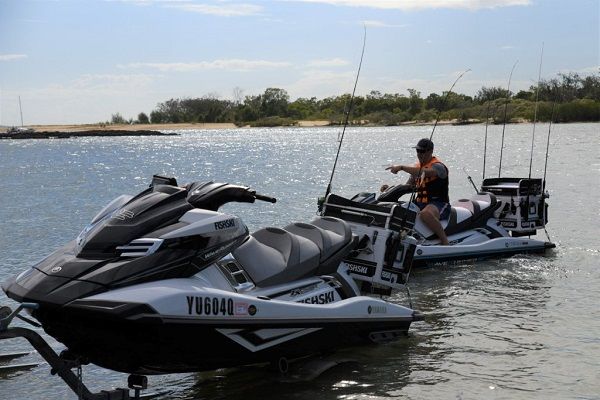 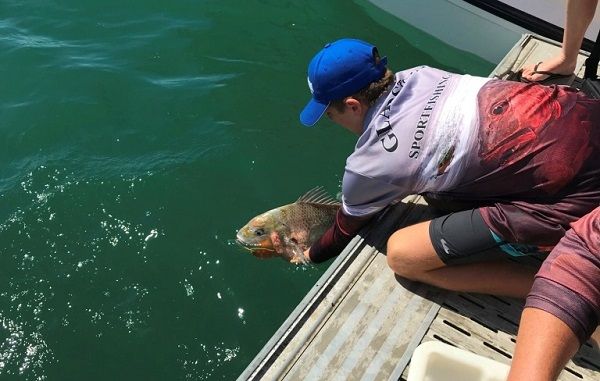 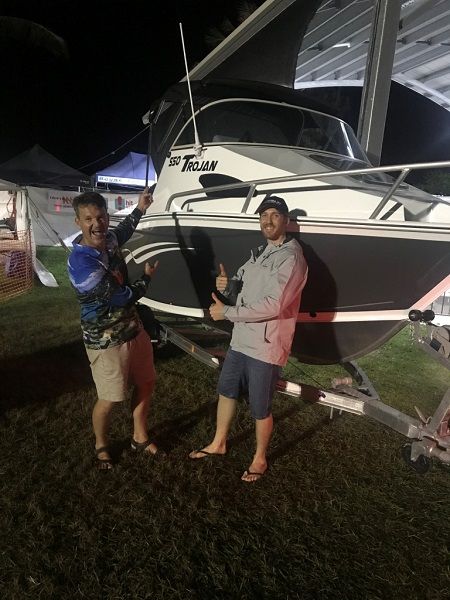 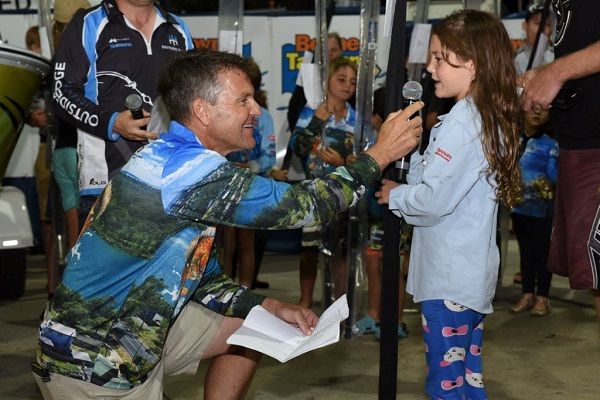 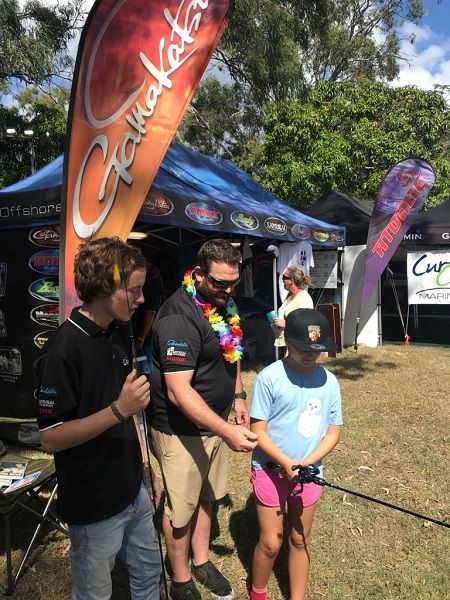 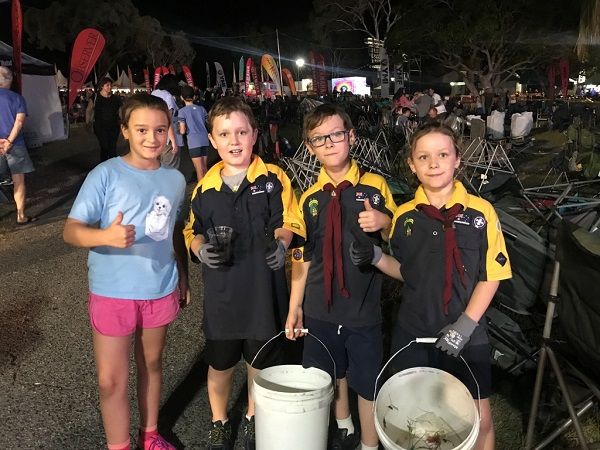 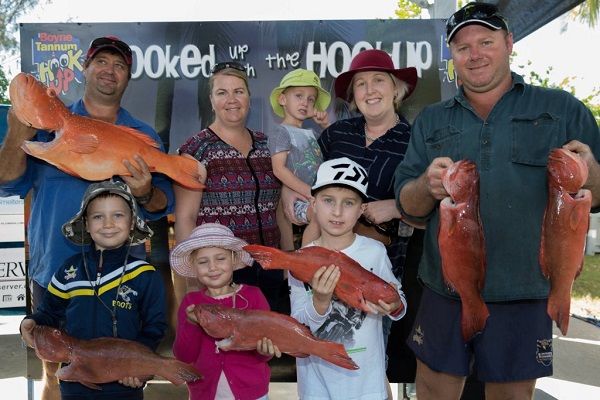 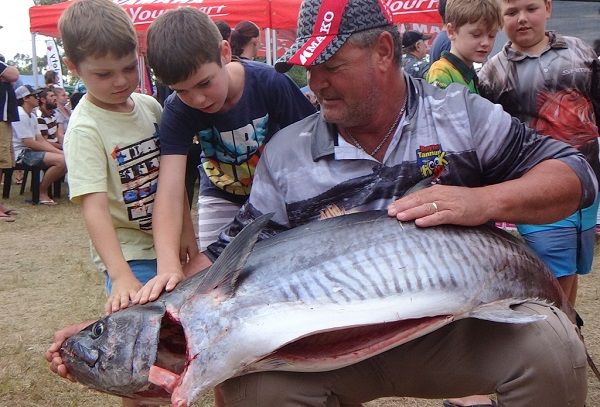 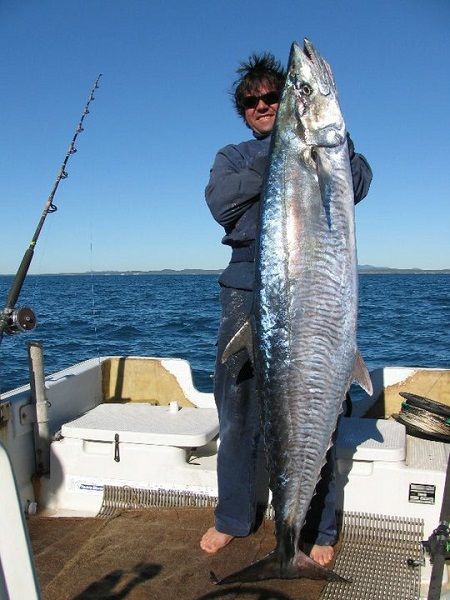 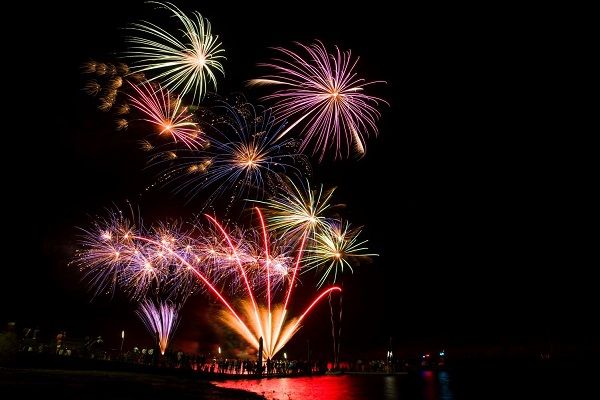 The Boyne Tannum Hookup is Australia’s Largest Family Fishing Competition; it’s based between Boyne Island and Tannum Sands a cosy half day drive north of Brisbane.

The event attracts some fifteen thousand fun loving anglers thanks to the beautiful environment, two hundred and fifty thousand dollars in drawn prizes, and best of all some magic fishing! Situated in the magnificent Gladstone Region this event is iconic with locals but those further afield are only just starting to cotton on.  Take me for example - I waited some 20 years to experience this event and the fishing, I should’ve visited sooner...it’s blown me away on many levels.

THE FISHING
For a start this is where the Barra Fishing first hits top gear as you travel north along the East Coast of Australia.  The area has always produced good catches of sizable saltwater Barra but it has become the meter plus Barra capital since the freshwaters of Awoonga Dam spilled during the last two floods.  You see Awoonga has been stocked with Barra for decades where they grew huge, and when these previously contained beasts came over the Dam Wall it increased the natural population of giant fish in the estuaries below by a thousand fold.   In the few months following a flood, anglers caught up to a dozen meter plus barra in the estuaries per day!  Impressive given a single meter plus barra in the salt water is considered a fish of a lifetime to many!  Even more impressive is that many of these big barra are caught along the Boyne River itself!

These estuary Barra numbers have thinned out in the Boyne a lot due to dispersion and commercial fishing.  Furthermore recreational fishing pressure has seen the barra become wiser and harder to catch, however giant fish over 1.2 meters are still caught regularly by those in the know.  Better still Lake Awoonga itself is seeing a comeback in numbers of big barra because fish stocked since the last flood have grown fast in the food rich waters.

The option to be able to target fresh or salt water barra within 30 minutes of the event base is a God Send, and there’s loads more options further afield.  The pro netters were busy on the Boyne River around the time of our visit so we travelled up the coast to the net free zone near Port Alma and caught some of the best conditioned salt water Barra I’ve ever seen.  My original plan to hit Awoonga was cancelled because the arvo we had scheduled was too windy.  In hindsight I’d pencil in a few days for Awoonga - the local guides and anglers we spoke to at the event were averaging 6 fish around the 80 cm mark in a half-day session!  These fish will be up around the meter long mark in the very near future – they grow up to a millimetre per day!

Both Awoonga Barra and the Saltwater Barra require some persistence and tips to catch but the local tackle shops and anglers you bump into are more than happy to help point you catch them – there’s lots of spots and barra to go round.
We also experienced some good whiting, bream and flathead fishing and the live weigh in section of event was an eye opener too with some cracking specimens coming in from near and far.  Add in some XL Jacks and Grunter and you soon see there’s plenty of estuary fish variety on offer, most of it in pristine sheltered waters.

Out to sea the action hots up even further – the inshore islands offer good protection when you wish to chase queenfish, jewfish, grunter and the like.  The sight fishing on the flats is untapped but local guides are starting to get into it. The good weather saw many boats head further out to the reef and some impressive fish were weighed in including a 29kg Mackerel that had thick shoulders like a dog tooth tuna!  Amongst the large variety of glamour reef species we saw big Coral Trout and Red Emperor grace the leader boards. The biggest Reds often nudge the 14 kilo mark!

I was lucky enough to have one of my daughters with me on this trip – my 9 year old Hailey.  Her best fish was a 1.3 meter long 15 kilo Spanish Mackerel – her PB by far and something we both will never forget.  Local guide Johnny Mitchell catches Spanish to 45kg...that’s bigger than most books say they grow. Many of the biggest fish weighed in were caught by Juniors and Females which is testament to the true family nature of the Boyne Tannum Hookup.

THE EVENT
What brought the experience together was the event itself - immersing yourself in a community of like-minded anglers from near and far was bliss.   The Boyne Tannum Hookup has been running 23 years and according to attendees it just keeps getting better, and that’s helped by a community vibe and great rules.

To win one of the bigger prizes from the two hundred and fifty thousand dollar pool, such as one of 9 boats or the Jet Ski, all you need do is enter!  Having the big prizes up for grabs by random draw puts everyone in the running and entry numbers are capped to keep odds great. It also means that rather than fishing flat out to win the biggest prize your family can actually spend time to enjoy the activities at the event; from a kids carnival, to educational stands, live music, and a food van court – this event rocks!  There was always something cool to see or do for all age groups across the 3 days.

The family fishing clinics were held just a short stroll from main stage on the nearby jetty and beach.  There we helped families learn how to catch whiting, bream and flathead...and some good ones at that.  This is something my family and I love doing and we all had a magnificent time.
Come weigh in mid arvo a crowd starts to amass, many of whom have left their foldable chairs on location from the day before.  After seeing what’s been bitting people settle in for the entertainment and boat draws.  The last night draws some 15,000 people and includes a spectacular fireworks display – it really is an eye opener and I had a ball helping out on stage and presenting prizes.

The timing of the event is also superb –autumn temperatures average around 17 degrees at night up to 27 during the day.  Outside the expected occasional tropical rain shower the weather by all accounts is usually bliss at this time of year, and that’s what we experienced.  This bodes well with the exploring to be done – from the outback rivers inland to the sandy shallow river mouths and the reefs beyond there’s many a pristine place to explore.  We even got to see Yellow Patch – a magnificent sand dune inside Cape Capricorn that can be seen from miles away at sea.

I personally didn’t get to the reef this time around but some brilliant fishing and snorkelling is on offer like only the Southern Great Barrier Reef can exhibit.  So many families spoke of the joy of turtle and dolphin watching whilst fishing.
It was also great to see the committee adding new divisions each year like the ‘Human Powered Category’ for kayak and SUP anglers.  The Jet Ski Fishing section is also building in popularity.  The variety of categories to fish was impressive and all these prizes are extra and above the two hundred and fifty thousand being drawn from entries.

WILL WE BE BACK?
The event, environment, family activities, and fishing were all exceptional...I’ve already pencilled in the 4th to 6th of May 2019 and I’ll be bringing the rest of my family with me - it really is a magic all round experience.

For more information check out www.boynetannumhookup.com.au