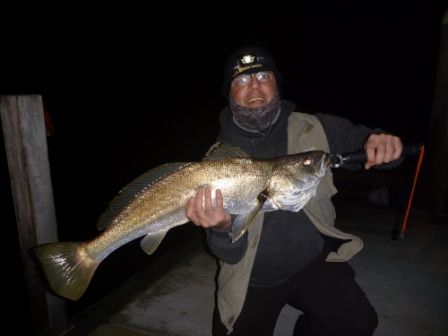 Sergeant Whitey with his PB mulloway caught in Melbourne

Occasional guest writer Sergeant Whitey has another fun adventure to tell of, this time on the Werribee River which flows into Port Phillip Bay, here’s Whitey:

Well another weekend down & another PB chalked up, not too many fish caught due to the water clarity/weed and other gunk floating through for most of the weekend thanks to the Southerly stirring up Port Phillip.

Friday night into early Saturday morning was the pick of the weekend and most time spent fishing with the wind easing off late in the afternoon. I arrived at the river just prior to the sun heading behind the hills close to the top of the tide, was fishing one of my usual spots in-between all the boats returning from the bay.

While chatting to one of the old locals, just as the plastic landed right next to one of the jetty pillars, as I lifted it something went SMACK but didn't stick. The old bloke said 'Gee that was a good hit" and I just replied by saying "Yeah it was a good Flattie". So I cast back out in the same spot & worked the plastic back towards the pillar, just as it was slowly sinking to the sea bed CHOMP & this time it stuck.

After a good account for itself the old bloke offered a hand with the net and the attached 56cm Flathead was landed. A quick release and not too long after another 38cm Flathead was safely landed and returned to the water.

Nothing then happened for the rest of the night until early Saturday morning which was approx halfway through the run out tide, the water cleared up slightly and I could see the odd baitfish darting away from something here and there, actually over most of the weekend the baitfish was pretty quiet.

So anyway, I cast out towards a few darting baitfish & while slowly working the plastic I felt a couple of soft tugs on the shad. I set the hook & felt a couple of good thumps on the rod tip, thought gee this feels like a good Flathead. Suddenly I felt a few heavier head shakes and then the rod bent over further & further, next thing the line started peeling from the reel & I then knew that this was no Lizard.

The line took off up-river so it was over to me and the 2-4kg Silstar HYPA to turn him around, a couple of short sharp pumps of the rod got his head back towards me. The fish then headed further out into the river but this made it easier for me as I now had more room to work with him as he was away from anything snaggy.

The headlight zoned in on the line & the first sight of the fish gave off a big big flash of silver...."MULLOWAY ON".. A few more good long darting runs kept me on my toes but the HYPA (along with myself) were well and truly ready this time and finally after another safe landing saw the attached Mulloway stretch out the tape to 85cms, eclipsing my recent 75cm two week old previous PB.

A young bloke came running over from another jetty to check it out, I asked if he could take the photo which he did of course. The only bad thing was that when I went to get the hook out of its mouth (did this before the photo) the bloody thing was so far down his gob that I could see some damage to the back of his throat (a bit of blood), and determined that the fish would not survive a return to the water. I asked the bloke if he wanted to take him for a feed which was met with a very hasty "YES".

Not too long after this the big chunks of floating weed appeared & fishing was then pretty pointless as you could hardly get a cast in freely (which is the main reason I usually only fish the incoming tide, and/or early into the run-out tides as this always happens), so it was off to the Triton for a couple of hours sleep.

I awoke about an hour into the new in-coming tide, shortly after all the boats started to rock up & head out again. They were churning up the water around the jetties but I kept at it for a while. Just before heading home BANG again something decent nailed the shad plastic under a rods distance from the jetty, another few good runs & the attached 54cm Flathead was landed, this thing was that fat across the shoulders it almost looked deformed!! Unfortunately again this fish had wrapped itself up in the line before I could get to it & had cut itself through the gills & was bleeding which you can see in the photo, I offered it to an old bloke who was just heading out in the boat with his son so they were happy with that one.

So not too many fish caught but the quality of the fish I did manage was still pretty good, again I can't say how impressed I am with my Silstar HYPA 7ft 2-4kg set-up. Matched with the Stradic CI4 2500 and for a rod that only costs $79 it has landed some pretty hefty fish for me during the few years I've owned it.

This weekend, at this stage, is planned for some Trout fishing on Saturday with friends. We haven't decided on where yet but that will be determined by the weather.

As usual, stay tuned for another episode of "Wacky Whitey's Fishing Adventures".....

P.S.
All of these fish, (like the fish in Newcastle), and every single fish I have caught at Werribee on soft plastics during the year have been while using, wait for it, yes wait for it, caught while utilising a "Lure Clip"......