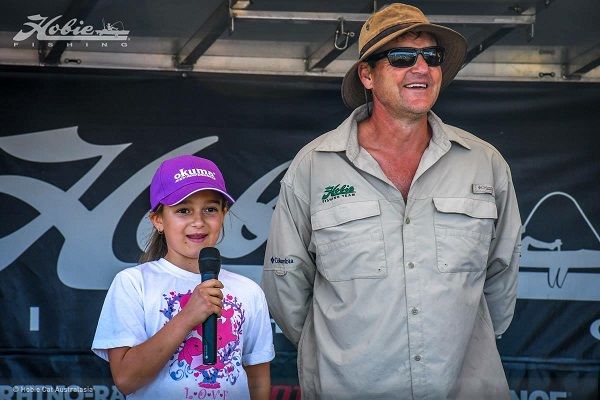 Hailey dobbed me in for loosing her fav lure 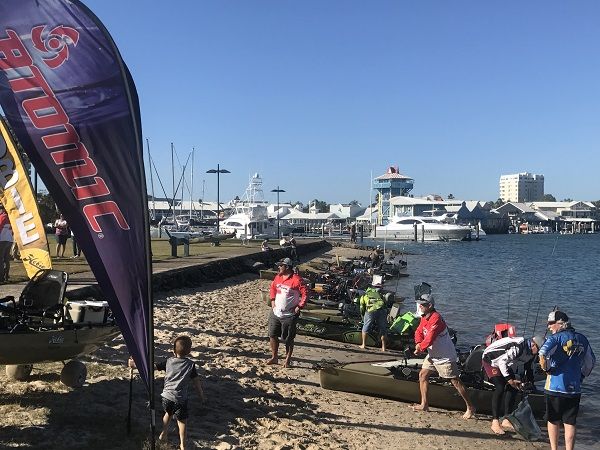 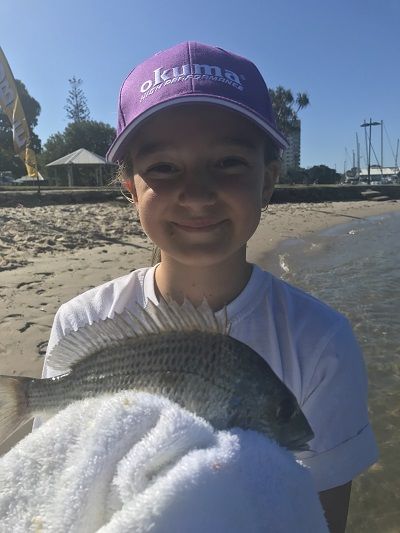 Bream on lure is the name of the game 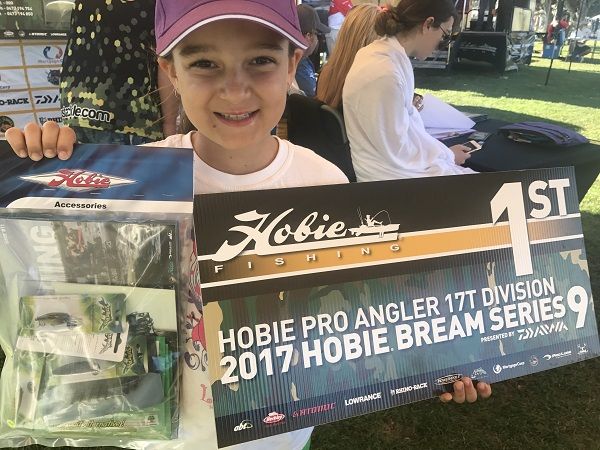 My 9 year old daughter Hailey and I took the plunge and entered in the new team section of the Hobie Kayak Bream Series at Mooloolaba.

This is a professional live weigh-in catch and release kayak fishing competition that is open to anglers of all skill levels.  It is a lure fishing only event.

Hailey is a bit of a whiz fishing kid -she started crawling into my office as a baby to wind my fishing reels and since then has become good at catching things like bream on bait and flattys on lure.   But she’s never tried bream on lure so we decided to do our best regardless of the result and this alone is a healthy mindset for youngsters to learn.

The night before we picked out a few lures then checked out a map and the tides and came up with a plan.

The event can be fished from any brand of kayak and we chose to fish together in a 2 man craft.  The start was awesome fun - racing 50 other kayaks to the best spots sure gets the blood pumping.

Hailey was urging me to peddle harder and get to the lead of the pack...and we almost did for a bit!  We then peeled off to the first spot - the front of the restaurant area where the bream school to eat food scraps.

We were in a Hobie Tandem Pro Angler which has ‘social seating’ which means we face each other which makes it easy for me to help her.  Landing the first bream that was almost scoring size had us excited very early in the piece but then it went quiet despite the calm conditions ideal for lure fishing.

Hailey asked,
“Why can’t we just use bait Dad? We know that works”.

So I explained how everyone has the same rules and that lure fishing is a challenge.  I added that if she can learn to catch a bream on lure it will prove she’s got some quality fishing talent.

A little rest, a toilet stop and a bite to eat at the wharf (the amenities at Mooloolaba are so handy) and Hailey got her second wind.

Additionally while a few competitors we paddled past hadn’t got on the score board some had caught good bream...and that made Hailey realise the bream were finicky today but not impossible.

We caught a few more bream and while none were big enough we had a ball trying to tempt some crackers we could see under the piers and trawlers.  We were to learn the same area fished good yesterday during the pre fish and hence why they were lure shy on comp day.  Hailey was taking notes on all this, including ensuring we do pre fish next time.

I stopped to buy Hailey some fish and chips for lunch and when I got back she was testing more lures – amazing how keen she had already become.

She caught a few smaller bream and some mosses perch  - all non scoring fish but still great fun.  And then we went looking for a fresh patch of big bream on the top of the tide.

I was only just saying to Hailey that catching big bream on requires local knowledge, skill and perseverance when bang I hooked a ripper on one of Hailey’s new lures.  The fish wrapped us around a pylon and after a tense minute trying to free it the line broke!  I was now in big trouble with my little team mate now...especially seeing we had now run out of time.

We learnt lots more talking to like minded competitors and it was great to see what the hard core bream buffs were able to bring to the weigh in.  I was also happy to see this has got Hailey doing more target casting and learning more about lures.

We were the only adult kid team and as such Hailey still got a prize and was happy to relay from the podium how much fun she had...and that I lost her newest lure.

These events are so well run and the organisers and competitors have a helpful and fun vibe that lifts everyone to a new height.  Whatever level you are at I cannot recommend these comps highly enough.

The comps are run at many venues around Australia, check out www.hobiefishing.com.au ...and most of all just enter...the rest will fall into place.  We are looking forward to the next one.