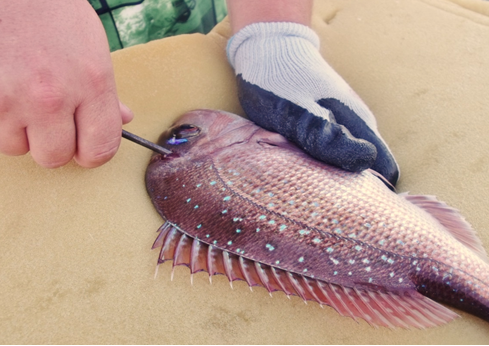 Caption 1: Illumination of the blue spots demonstrating the technique has been successful 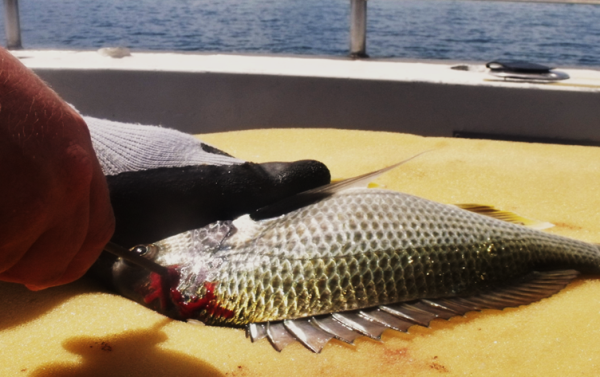 Caption 2: A bream subdued on foam and handled with a glove is much easier to deal with – No matter if fishing from a boat, a beach or a rock wall

Caption 3: Most anglers will have access to a simple Phillips screwdriver 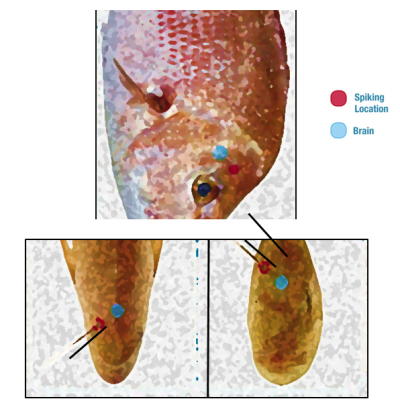 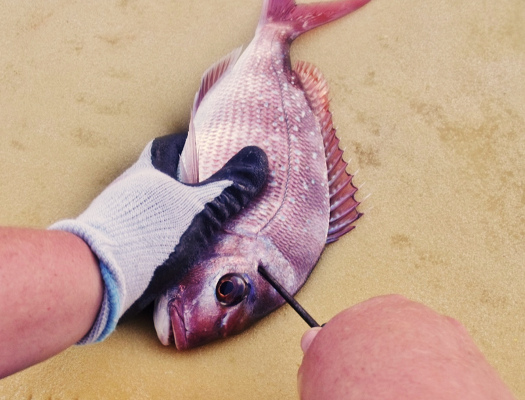 Caption 5: Screwdriver positioned near the brain

So far in this series, we have determined that we can all make a significant contribution to sustaining a healthy future of fishing for generations to come, and that our responsibility of employing correct fish handling practice cannot be underestimated.

It has then been identified that there is indeed an inexpensive, easier and superior way of handling fish than most of the current methods widely used today– beginning with a simple piece of saturated sponge as a landing surface. To further eliminate the uncontrolled flipping of fish, equipment such as a cotton glove worn on your bait hand will also provide for much more effective control of your catch.

Welcome to the third installment of this series, where we’ll now explore the advantages and undertake instruction of a brilliant fish killing technique that has been used for centuries. There’s no doubt that most anglers have heard of it, although it is doubtful that many have ever tried it, and perhaps even less have been able to properly implement the procedure.

Ike Jime – or I.J. as it is often referred – is quite simply the technique of lethal brain spiking. Without confusing you with the science, I.J. has many benefits, and these include but are not limited to:

Performed correctly, the results from this method are immediate. You can visually notice a change in the appearance of the fish merely seconds after initiating the fatal blow. For example, a Snapper’s skin will turn bright crimson while their blue spots almost illuminate.

Bream and Whiting turn a brilliant pewter colour with pronounced yellow, while reef fish such as Coral Trout or Red Emperor turn magically scarlet. The transformation is immediate and truly amazing.

(See Caption 2 - A bream subdued on foam and handled with a glove is much easier to deal with – No matter if fishing from a boat, a beach or a rock wall)

Pelagic species also assume the same outstanding results, although the technique is slightly different and requires a little more attention and care. Discussion of pelagic killing technique will not take place here, other than to say that if a pelagic has been landed, killed and then ice brined in accordance with the guidelines herein (with a slightly different technique for locating the brain) – but failed to be handled with cotton gloves – the specimen will emerge from the brine with obvious hand prints upon the skin where the mere heat from human hands has burnt the animal. This reinforces the point of the high sensitivity of a fishes scales and that a cotton glove when fishing could well be considered mandatory.

The art of Ike Jime can be performed on any fish, be it:

When practicing fishing, it is certain that everyone uses their own particular method of terminating the life of a fish once caught and kept. There are a few methods that instantly come to mind. These include but are not limited to:

Or the terribly barbaric:

As well as particularly inhumane, the above methods (accept decapitation which has its own drawbacks) all have a common flaw – they allow the fish to keep firing an electrical impulse from the brain, which then pumps lactate and cortisol chemical (created by stress) directly into the flesh. This chemical is poison and results in contamination of the flesh, which unfortunately equals an inferior eating product. Decapitation allows for exposure of the flesh to gut and gill contaminants during Riga mortise, once again resulting in an inferior table fish. While contrary to popular belief, even allowing a fish to survive temporarily in a live tank greatly increases stress and thus increased cortisol levels (Pankhurst and Sharples 1992) and ultimately produces an inferior eating product.

Every angler has likely seen pale bands that suddenly appear along the sides of a fish, as it patiently awaits its fate. These bands, or stripes that appear, are the unmistakable telltale signs of a distressed fish, and represent a greatly diminished chance of quality eating, or survival if returned to the water. This stress and suffering is unnecessary, and precisely why the exacting efficiency of the brain spike method is far superior to any other kind of fish killing method available. And as responsible anglers, we have an obligation to employ it.

Now while becoming adept at Brain Spiking (which is certainly more sophisticated than bludgeoning an animal to death) is going to take commitment, effort, concentration and practice, it is certainly not rocket science. Practice makes perfect, and I’ve been able to teach many anglers the technique – including my 10 year old daughter, of which she is now proficient. Once you have the fundamentals sorted, it can then be perfected – meaning you can hit the mark very quickly with little hesitation or fuss.

For now though, let’s stick to the basics.

Q. So how do you Brain spike then?
A. It is relatively simple. If you follow the wet sponge landing technique from Part II, the fish will be laying quite still making it easy to handle, which simplifies the process significantly.

Q.  So for the spike itself?
A. Authentic Japanese killing tools are called Hukka’s, though a small Phillips head screwdriver is all that is required for recreational fishing. Crab spikes are too pointy and from experience, completely unsuitable.

Eleven Second Brain Spike Solution
1. Firstly, with your glove hand, flip the fish over (preferably during the landing) so it is right side facing up. Brain spiking is always performed on the right side – that is, left side down on the foam. Also, have the fish in front of you lengthways so that the tail is furthest away from your body. Holding the fish around its belly (palm facing up) very firmly with your glove hand, hold your spike with your opposing hand with the tip of the spike resting on the temple.
Important: If you follow the line from the false gill plate and the true gill plate up in a triangle so that they may meet in a point, there will be a soft muscular indentation on the fishes head – not unlike a human temple. This is the entry point for the spike.
2. Let’s assume that the point of your spike represents the center of a clock face, and the spike is the small hand.
3. Let’s call the tail of the fish the big hand and that direction is 12 o’clock.
4. Have the spike held at 4 o’clock and at a downward angle of 45 degrees.
5. Now confidently and with good pressure, thrust the spike continuing on this same angle and direction.
6. You will feel it penetrate the skull and you have to push firmly until you ‘crunch’ through the top of the brain bone.
Note: Spiking directly from the side – where the brain bone is significantly thicker – should be avoided as the likelihood of a failed kill is high.
7. Be careful not to push straight through the other side, but you will know you have located the brain by a severe contortion of the fish’s reflex. With the spike now in the brain cavity, wiggle the spike gently about from side to side in a scraping motion. The animal may make another couple of contortions in its final objection to what is occurring, but this will assure the fish is dead and that no further electrical ‘stress’ impulse can be fired from the brain resulting in contamination of the flesh.
8. It is now important to quickly lash under the gills near the spine and bleed the fish out. The spike can also be used for this task.

All up this should take about 11 seconds to efficiently kill and bleed your catch.

If the procedure has been performed incorrectly (which may be a common occurrence whist learning the technique), the obvious change in colour will not have occurred and the fish may still flip about in the ice box. In this circumstance the action must be undertaken again, until a definitive kill has been achieved.

Now remember, the whole time this has taken place, you have actually gained time from not fumbling, struggling and attempting to cleanly wrangle your catch from your hook to then deal with it. The fish has been cleanly landed to wet sponge – carefully avoiding contact with anything hard, dry or hot – handled with a glove hand for sizing and positioning right side up, and then the animal’s life has been extinguished swiftly and humanely using the brain spike technique. That’s the long and the short of it. Swift, smart, safe and sophisticated. Once again leaving you wondering why you hadn’t been using this technique years ago.

Q.  So what is the last step taken to complete this fundamental fish handling process?
A.  Be sure to tune in next month for the fourth and final part of this series, where you’ll find out the chilling details of how to guarantee you’ll be taking the absolute best possible eating product home to your dinner table – every time.

Until then, see you in the soup!