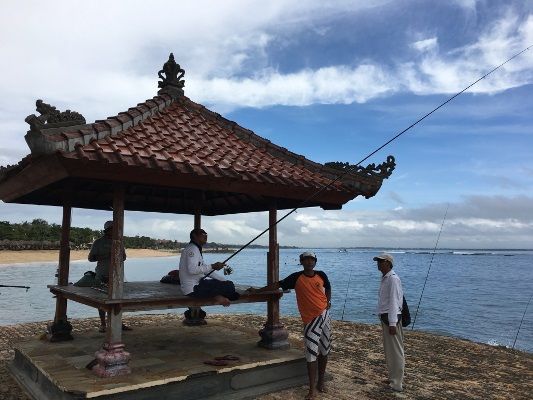 The pergolas on the Nusa Dua resort strip mad for ideal, fun and sociable fishing platforms 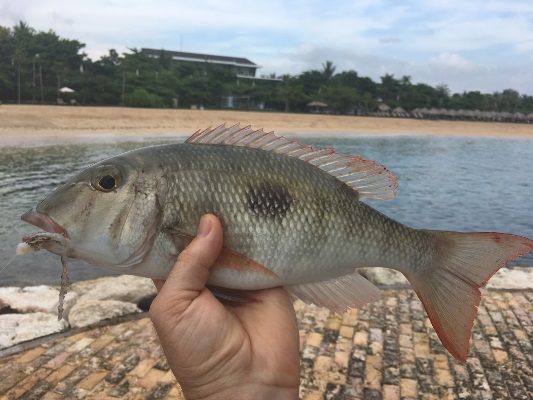 Various small emperor species were the main catch. This is at the bigger end of the size caught 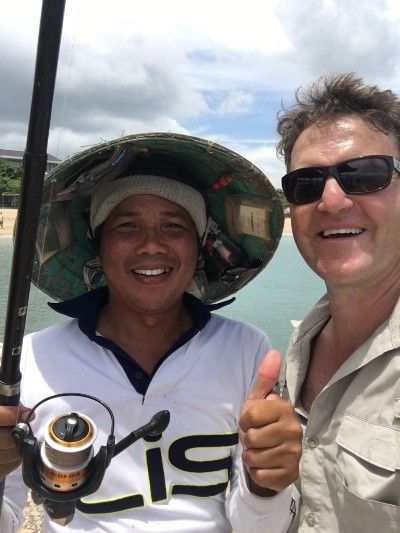 Traditional Balinese fishing hats were cool, they help beat the heat and carry tackle as well 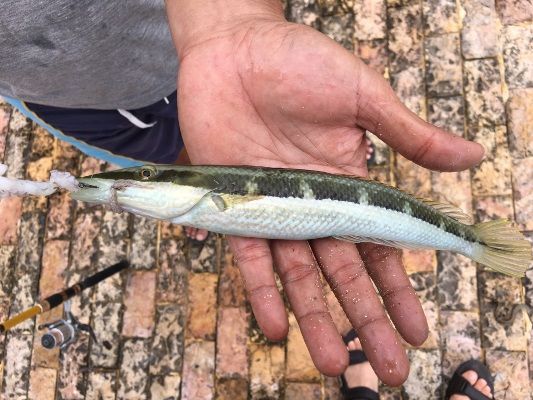 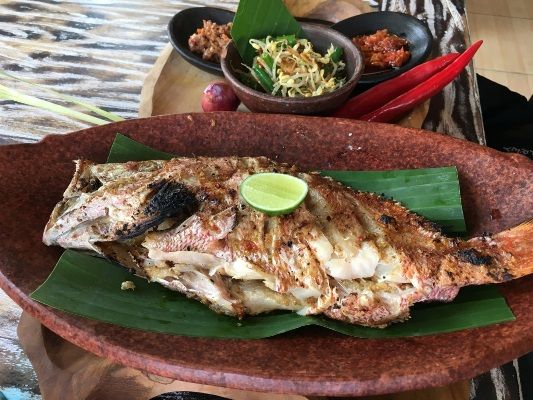 Anything remotely plate sized is called a snapper, even goldfish 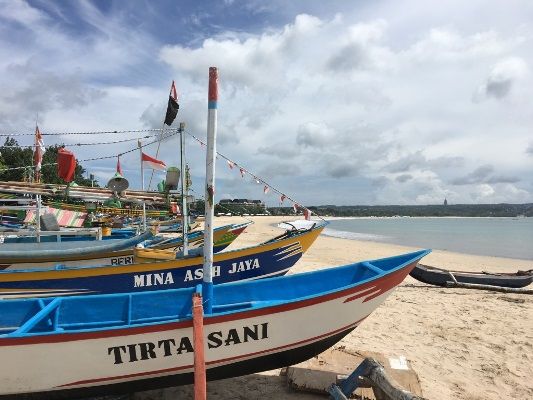 Bali Fishing charter boats are a little expensive by Aust Standards. A traditional boat is a cheaper option, BYO tackle 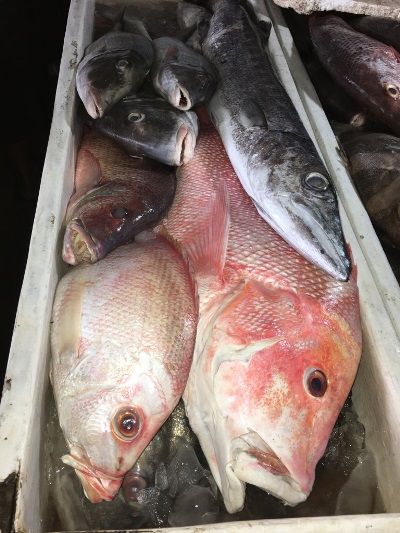 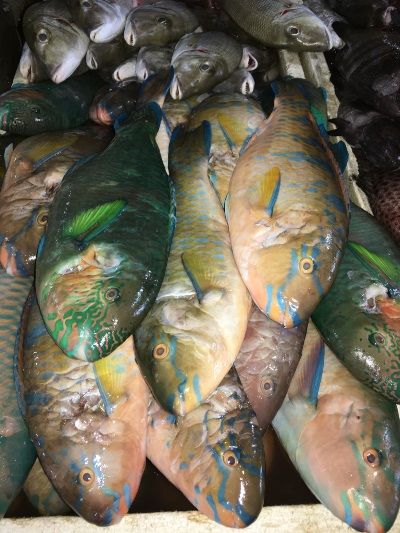 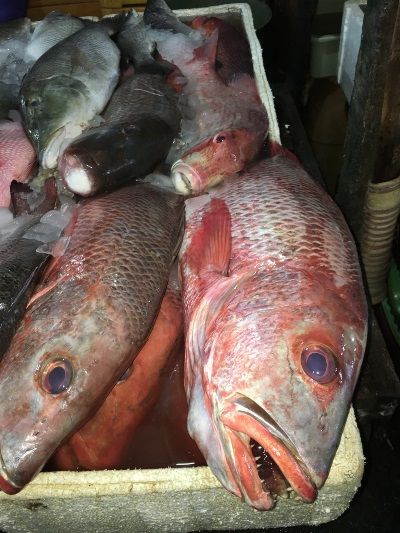 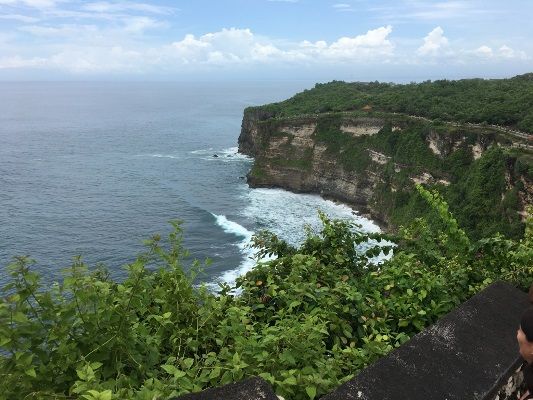 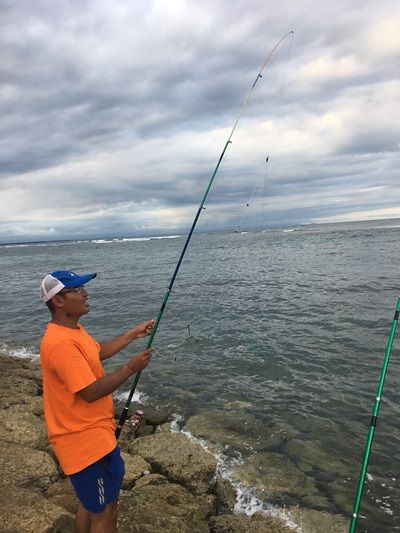 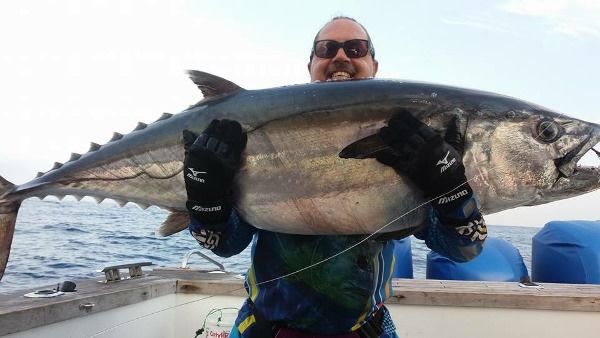 There are big sports fish there too, like this Dogtooth Tuna caught by the folks at Pepe Bali Fishing

You might be saying ‘what the?’ but Bali is such a nearby and popular destination for Aussies that I thought it is well and truly time I jump over there and review what fishing is on offer.

There was very little available online as an overall guide on what fishing is on offer so I am hoping this article helps anglers heading over that way.

Bali is not known as a fishing hot spot, partly because of the large population of some 3 million people on an island just 100k wide by 150 k long, and partly because there is so much else on the ‘to do’ list.  Never the less I found there is still some good fishing to be had and there’s plenty of higher end angling to check out next visit!

Geographically Bali is not a whole lot closer to the equator than Darwin or Cape York and hence the climate and saltwater species are similar.

Based at the resort strip at Nusa Dua my first foray was just a short stroll out to the main sheltered beach where a fringing coral reef breaks most of the swell.

I found that to catch a fish here it’s primarily basic finesse bait rigs or plastics for small reef species and the very occasional passing trevally to 60cm.

There was no size limit and locals took everything for the table so most reef fish are 20 to 40 cm (at best).  However it was still pretty cool to fish and compare notes with the Balinese anglers in the comfort of the pergolas at the end of many of the sand Groynes.  Interestingly one guy was casting a short net on his rod (see pic) and few weddings parties came through to make things even more different.

To catch the small emperor consistently you really had to fish an hour or two either side of the high tide when these fish get deep enough water to cruise in and feed.  You had to land your running sinker rig in the sand patches amongst the weed/coral for best results.

A 3 kg main line, 3 kg leader, 1 to 2 ounce ball sinker and a nice fine gauge size 4 hook was the go.  Baits included prawn borrowed from the resort (bait shops are non existent), small crabs (there are plenty around), or if you dare handle them a piece of eel (small eels are a pest bycatch they make great bait but they bite!).   Locals were pretty handy giving you a piece of bait especially if they knew you would give them what you catch.  They sourced baby squid and bait fish from the markets further afield.

The other good option was small 2 to 3 inch long scented plastics fished on a 4 to 6 gram jig head with a fine gauge size 2 hook.

The various emperor species had traditional names but I was soon to learn that anything roughly plate sized and shaped was called a snapper.  If you look at a few of the pictures here abouts you will see that some look the same as the emperor species we get back in Australia like grassy sweetlip, long nose emperor, spangled emporer etc.

There was also a small but abundant species that had wrasse colors and a pike shape.  A smaller hook helped catch these.

I had a really good time fishing with the locals from the Pergolas and after 3 or 4 trips to the same place on the same tide we all became fishing friends.

Further out anything can and does swim along the drop off from various tuna species and other pelagics and bigger reef species such as coral trout and larger versions of the inshore emperor we caught off the beach.   But I must stress there is a lot of fishing pressure from local rec anglers and massive commercial fishing fleet so bigger fish are nowhere near as common as some hot spots in Australia...although like anywhere I hear it does have its day, especially when the pelagic swing past.

To get to some of these deeper spots rock anglers will be pleased to hear there are places where the ocean meets the shore without a fringing reef, such as the ‘water blow’ and other nearby landmarks just south of the main resort strip.  Here the beaches start to peter out and the cliffs begin and strong ocean currents and swell push all manner of travelling game fish within casting distance...if you are lucky...

I took the easier option and hit the cliffs on the troll with a jet ski in the evening.  I caught zip and my new found fishing buddies back at the beach were surprised at the lack of results and happily showed me pictures of popping GT’s to 70 cm, various small tuna species such as mack tuna, frigate mackerel, small blue fin and even yellow fin.  Looking at the pics some were caught land based which is always super cool.  If I hadn’t done so much quality land based fishing in Australia I would’ve happily spun off the rocks for hours (youngsters with lots of time and fish to tick off their list take note!)

I was on a budget so in hindsight I should’ve fished off the rocks a bit more or bartered better for a cheaper charter – you can get boats for $20au per hour if you walk along the beach looking. I paid $75 per hour for the jet ski and a boat was going to cost me the same becuase I only asked the one operator.  This was expensive and hence why I only went for an hour.

On the topic of price, while clothes, gifts, accom and food are exceptionally cheap in Bali, charter boats are very expensive! A standard rate for a 3 hour charter is around $250au.  You are expected to bargain and could get this down to $150 but even that’s expensive for the mediocre fishing near to the main ports.  You really have to be prepared to source operators and find one that can give you a boat at a good rate so you can explore and fish for longer.  I was later to some across traditional boats for $30 per hour which would’ve been handy to know at the start!

With all this in mind the best part of Nusa Dua fishing was the relaxed pergola based fishing – shady, good company, a cocktail nearby if you needed one to beat the heat and learning about the local fishing and culture along the way.

Further inland was an eye opener.  The well kept and clean resort strip and government offices of Nusa Due gave way to the mayhem of Bali streets with shops of all manner lining every road anywhere.

I must say I was very disappointed to see so much rubbish, especially plastic on the side of the road and collecting in the rivers and water ways.  In some places it looked like tip!  Some of this gets washed out onto the reefs – I saw it for myself.  A public education campaign on this is long overdue. The lack of understanding on the damage to tourism and the damage this does to the environment and fish is one of very few things I didn’t like about Bali.

Amongst the mayhem I found one of several small fish farms where you pay for the fish you catch.  It was crazy to see such an industrial and run down old prawn farm being relished by a handful of local anglers.  Despite the less than attractive back drop the anglers there were still enjoying wetting a line so we joined in.  ‘We’ being my wife Marilyn and our tour driver Agung Wana who happily took us anywhere on the island for the going rate of $60au per day.  Note that a good tour driver like Agung was invaluable to us...he knew where to take us and when and you have lots of fun along the way.

Using doe based baits on finesse rigs the catches included baby milkfish (strong and fast at any size), small Tilapia and 35 cm gold fish.  Much to our amusement goldfish were called snapper.  If in doubt call anything a snapper.

We had fun but I certainly wouldn’t put this on your list...there’s much prettier and more productive places to fish in the ocean with no fee attached.  Actually now that I think of it my wife Marilyn scammed me here because she counted this as fishing time which balanced out the shopping time and sight seeing she had been relishing. You gotta watch those girls...even the good ones.

We travelled as far north as Ubud but along the way didn’t see any freshwater streams worth fishing.  There are some lakes and rivers in the north of the island but time permitted us from researching or travelling to these places.

The last port of call was to the Jimbaran Fish Market where one of the traditional fleet of boats is based.  It was a nose closer because the boats are cleaned on the beach but if you dared walk into the main shed it was an eye opener!  Loads of familiar tropical species like surf parrot fish, various emperor, Spanish macks, mangrove jacks and more, some in HUGE sizes.  Check the pictures here abouts.  Earlier that day we noticed some of these traditional boats fishing off the steep headlands near the famous Uluwatu Seaside temples.  It made sense for the nearest sheltered launch site to these grand towering cliffs has become the home to a fishing fleet.

So there is larger saltwater fish there, you just need to venture further afield with a bit more time.  As another example a local operator I came across on this last day caught a 60 kilo dogtooth.  He had pics a face book posts to prove it!

The challenge is getting a charter operator at a price competitive to what we are used to in Australia.  A reasonable half day charter on a suitable sized boat was around $700au, and a full on day trip to the more remote reefs and island was $1600au.  That’s ok if you have half a dozen mates to share the cost, but too much for me on my own given I wouldn’t be catching anything new or bigger than I do back in Australia.

We did so much sightseeing , shopping and taste testing along the way that the lack of time and budget for big ocean fish didn’t stop us from having a brilliant trip.  The only thing I might do next time is book a share charter or take some bigger gear and head out on a traditional boat from Jimbaran.   If you wish to try this there’s little available on line so check such places out early in the trip so you can make contact and overcome the language barriers.

Should you wish to wet a line in Bali I hope this will put you ahead of where we started and you should have even more fun than we did.