Essentials of Spinning for Australian Salmon 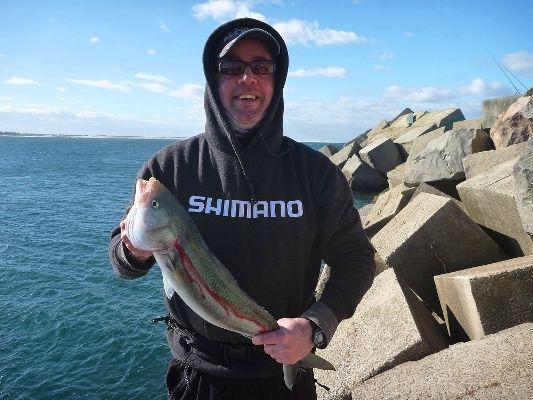 Attention! If you want to catch the iconic Australian Salmon, off duty Sergeant Whitey has some tips for you!

Australian Salmon are great fish to catch due to their sheer power and occasional aerobatic leaps of freedom, but I reckon that if you lined up 50 fishermen in a row and asked them all for their individual techniques, then you would get 50 complete different answers.

The following is a list of techniques, hints & tips, to hopefully get you onto these big fighting Australian Salmon.  It is based on fishing around the Stockton Breakwall area near Newcastle Harbour, NSW, but I spoke to Rob Paxevanos, author of Australian Fishing Basics, and he tells me that these techniques will work well on Aussie Salmon on breakwalls, headlands and deeper estuary mouths across the southern half of Australia.

Growing up in Tasmania and chasing the elusive Trout most of my life it’s always been about ‘Matching the Hatch’, basically, finding out what the Trout are feeding on & tossing flies, lures, baits, etc, to fool them into a strike. So I put this same theory into action for Australian Salmon, knowing that they feed on things like Pillies, Whitebait & Bluebait, and other smallish baitfish.

Time of Day: I’ve found that the best time of day for using lures/plastics has been first light until mid-morning, and again late afternoon until dark. Bait fishing has seen many Salmon caught during different times of day, the majority down deep with Pillies the main success for bait fishermen. So obviously the fish are still down there somewhere; but not as actively hunting, more being enticed by the smell of an easy meal.  You would need to put in more time if using lures during the day.

Tides: The majority of Salmon that I’ve caught has been during the run-out tide or very early during the run-in tidal flow. It appears that they seem to be on the bite whenever there is water flow/movement & then go dormant once the tide starts to slow down or stops, I believe that this is due to the baitfish also being moved along in the water current and the Salmon chasing after them (makes sense to me anyway).

Weather: There has been no real difference in the conditions for me, I’ve caught them in rough windy weather, and on calm sunny days. The only thing I’ve really noticed is the clarity of the water, the Salmon really seem to be on during crystal clear ocean days.

Lures: So this is my main point of interest, again I try to match what I usually see swimming past me on the day. There’s usually always baitfish up to an inch in size swimming along the shoreline, but then I sometimes see bait fishermen catching Salmon on Pillies off the bottom. So I mainly use metal lures ranging in size from 15 grams up to 25 grams only, hard body minnows up to approx 10cm, and soft plastics also up to around the 10-12cm mark. I believe that this covers all the baitfish from the very small to the medium size that Salmon chase after to eat.

Metal lures in the following colours, Pearl White, White with Red/Pink Head (represents a Smelt pattern), Chrome or Gold with Blue/Green Stripe, or anything representing a Blue Sardine, should see you get onto some fish. Best metals I’ve found have been Luhr Jensen Crippled Minnows, Acme Cleo Little Spoons, and River2Sea Sea Rocks. I have all mine rigged with VMC 6X Hooks in size 4 for the bigger metals, and size 6 for the small. Hard body minnows; again I try to use these in all the above metal lure colours, and rigged with the same size hooks. Main lures I use are Rapala X-Rap Countdowns, Savage Gear Minnows, or Kokoda Minnows.

Soft Plastics I’ll try to use something similar to a Pillie or other smallish baitfish, any natural colour plastic, like Silver, Pale White, or even something that resembles a small Salmonoid. I’ve caught several using a Blueish type Rainbow Trout pattern made by Kokoda called a Pop-Eye soft plastic, but anything made by Squidgy or Z-Man with a paddle-type tail should do the trick.

Technique: My technique is probably as simple as it gets, I try to keep the lure in the fishes face for as long as possible to trigger a strike. So I’ll cast out as far as I can, click over the bail arm, and retrieve the lure as slow as possible. Basically, I impart just enough movement to get the lure flicking from side to side at a very slow swimming pace. Most people cast out & retrieve the lure at a million miles an hour to imitate a fleeing baitfish-well that’s all good when the Pelagic fish have schooled up & are chasing the baitfish into a fleeing frenzy. However, the rest of the time the baitfish will be swimming along slowly minding their business, and the Pelagics will ambush them from behind.

The main area I target is along the edges given that the baitfish are cruising along rock walls, shorelines, etc, usually getting washed around in the currents. I imitate these fish and it’s working very well, even casting from the beach and using the metals up to 25grams I still get good amounts of fish, including Tailor & Pike.

If casting in deeper water I’ll alternate between surface fishing or letting the lure sink till it hits the bottom & start my slow retrieve from there.

Final Tips: If you try all the above and get a few hits without hook-ups or no action whatsoever, don’t be afraid to tweak things around a bit, for example a few tweaks imparted to the lure or a little pace can fire up the salmon on occasion.