A new type of kayak loaded with technology 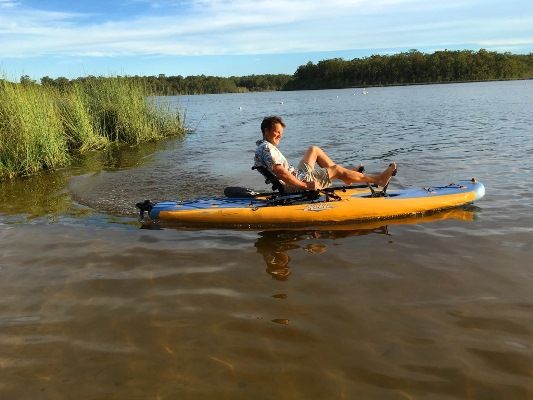 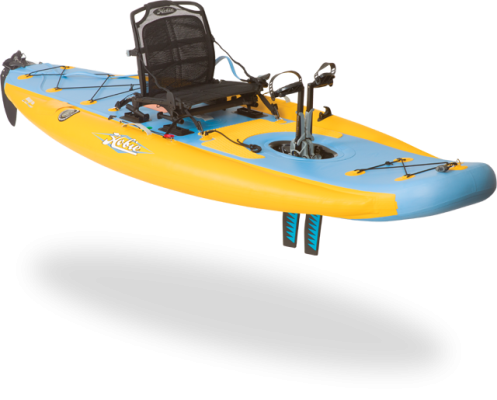 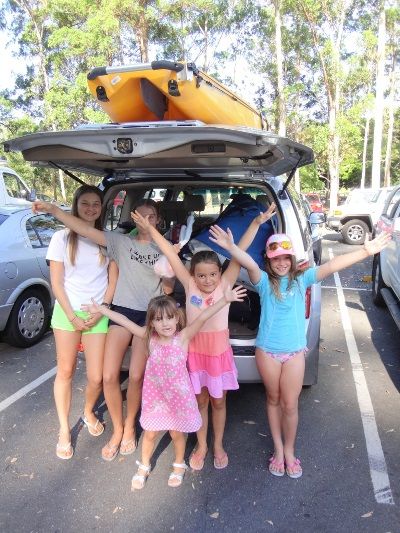 Being Inflatable meant I could bring extra kayaks in the back seat...now everyone has a craft to play on 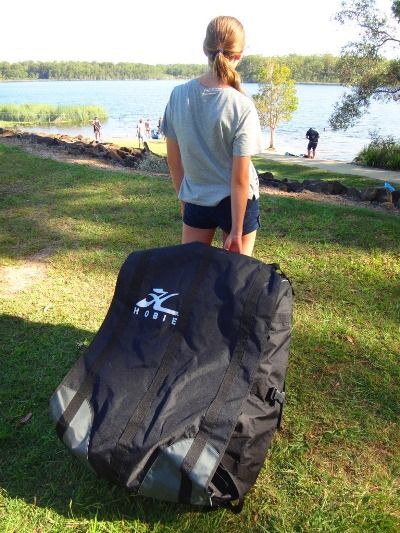 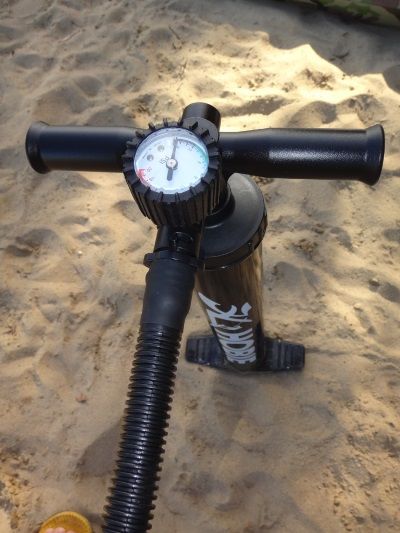 The new high volume pump is swift and easy to use 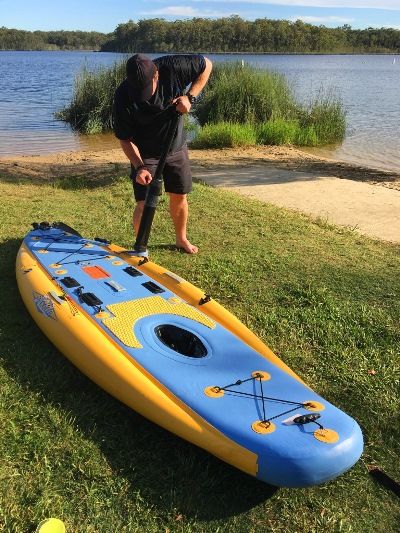 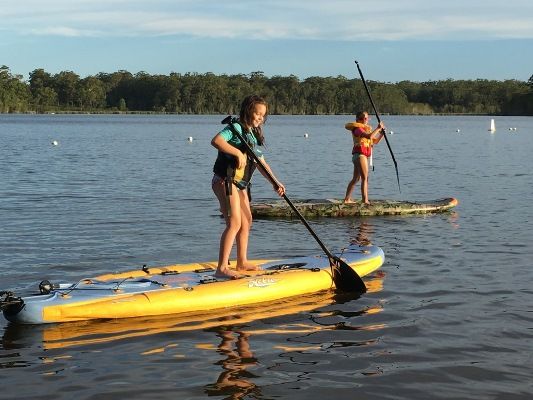 The Hobie i11s (foreground) doubles up as an SUP. It has almost the same hull as the Hobie Sportsman SUP (background) 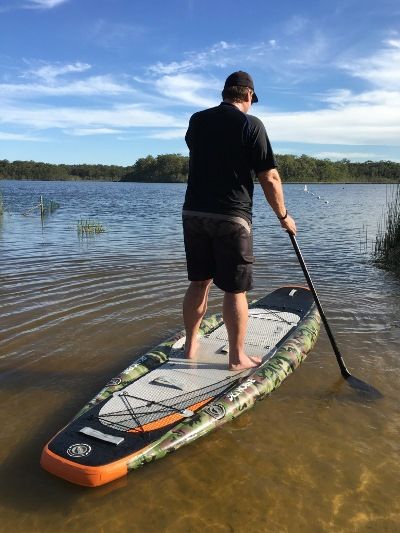 My mate Baz is a SUP new comer and bigger than me at six four four and one hundred and twenty kilos. He found both the i11s and the Sportsmans (pictured) very stable and easy to stand up on 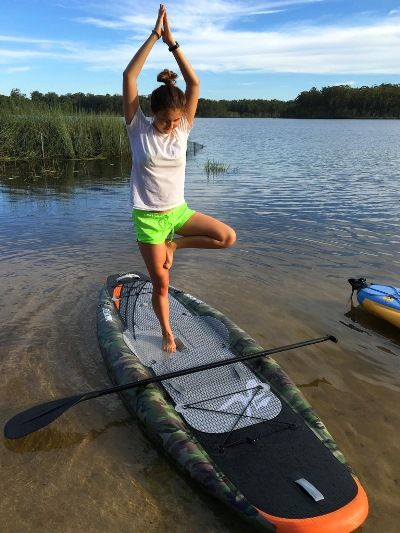 Even stable enough for the new sport of SUP Yoga 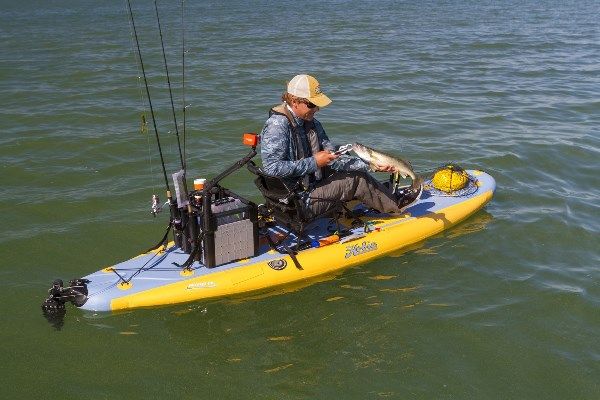 Take a new design of kayak and throw a mirage drive in it and what do you have...an amazingly responsive and manoeuvrable water craft the likes of which the world has never seen!

Add the fact that it’s an inflatable that fits into a roller bag and all of a sudden you can take it with you anywhere.

Hobie’s new i11s is a fascinating craft and I’ve put it to the test to determine where it will shine.

Let’s take her for a swim

The first thing that became apparent was that I was able to transport more water craft without needing a trailer, which is very handy for my kayak loving family.  My trusty Hobie Pro Angler 14 was on the roof racks of my 4WD and the new i11s was thrown in the back because it packs up into a roller bag which is only the size of a large suitcase.

Parents, 4 kids, 2 kayaks and one car...allow me to put the Griswold’s ‘Holiday Road’ soundtrack in your head to get the feel of the fun on the Horizon.

My mate and local school teacher Baz Pedersen was also along with a identical  i11s to test out.  Baz is a kayaking novice and at six foot four and one hundred and ten kilograms is a big bloke to boot so he was engaged to help me test the craft on the ‘newcommer’ and ‘big fella’ fronts.

We rolled the kayaks down to the waters edge , opened the bag and put the high-volume easy-to-use pump into use. I noticed immediately Hobie have made a great pump system even better, including a built in pressure gauge.

Baz has never even seen a high end inflatable kayak before but such is the user friendliness of these new Hobies he had his one ready in just a few minutes.

Used as a SUP

Before the main event of putting in the Mirage drive we tried the craft as a Stand Up Paddle Board (SUP).  Stability and performance is part of Hobie’s surfboard/SUP heritage and it certainly shinned through.

The i11s comes with a centre fin that you can attach which aids tracking when using it as a SUP. I do a lot of lake estuary and bay SUP cruising and this is what the craft is mainly designed for when in SUP mode.  I found it to be easily the most stable SUP I’ve ever used, it tracks well and for a craft of this type and has good speed and turning ability too.  Big Baz concluded the same. Neither of us could wipe the smile from our faces, these things are fun.

My daughter Caitlin used the amazing stability as an opportunity to do her first bit of ‘SUP Yoga’, which she tells me is growing in popularity.

It was nice to have that extra buoyancy too because it means you can take a small kid with you to share the fun.

We then popped on the state of the art ‘advantage’ seat which is fully adjustable and keeps your bum up off the water and dry.

The main event was now upon us as the real key to this craft is the Mirage Drive.  Hobies revolutionary peddle/foot driven flipper system is by far the most efficient powerful and fast ‘human driven’ propulsion system in the world.  Putting this drive on the lightest Hobie on the market has opened eyes further.

With every push of the peddles, you can feel the craft surging powerfully and you get to top speed ridiculously quick. Hooking into turns is brilliant fun.

For the uninitiated, the mirage drive is so efficient that an average person can go faster than an Olympic kayaker trying to race you in the same craft using a paddle.

Sitting on 3 knots requires just a slow easy pedal, so heading into a stiff breeze or current is no chore at all (equivalent to the effort of a casual walk in the park).  You can easily reach 6 knots if you’re fit.

Most of all though the Mirage drive makes the craft SO FISHABLE! With just a little practice anyone can hold still into wind or current while casting to a snag or sitting over a good spot.  You can also hold your rod while trolling which take it from this old fishing guide is essential in avoiding snags, feeling bites, and hooking fish.
Importantly, I cast with my Hobie side-on so when I do hook big fish I have immediate and immense power to drag that sucker out of the snags. I’ve done this a thousand times and have long forgot how handy the mirage drive for this...that is until a mate reminded me with a video of him losing a one-in-10-year fish whilst trying to hold a conventional kayak paddle and a loaded rod at the same time!

Also worthy of mention is that you can propel yourself over shallow water by keeping your feet apart and making little movements that make the flippers skull in small strokes while up close to the hull.
But what will surprise people that already have a mirage drive is the incredible manoeuvrability of this new craft, you can change track or turn like lightning in this thing allowing expert anglers to fish the tightest of waterways and cover like never before.

RIGIDITY AND DURABILITY:
The craft has 3 chambers: middle, port and starboard. Thanks to the state of the art Hobie Drop Stitch Technology these can be inflated too much higher pressure and the structural rigidity produced is something you need to feel for yourself to believe.  The result is far closer to the feel of a hard bodied kayak than an inflatable. I urge you to have a look at this technology if only to see how far it has come.

Durability? I’ve used earlier model Hobie Inflatable’s for some 7 years across many of Australia’s Environs.  I take the usual care and maintenance needed and couldn’t fault the longevity of service these craft produced.  Besides where you use them most (estuary, river, lakes, bays) I also sometimes duck out to nab a snapper on the less fished reefs far from the busy ramps. The i11s is easily capable of this and more.

ON BOARD STORAGE AND ACCESSORIES:
In fishing trips so far I have gone ‘minimalistic’ and simply used the many tie-down straps on the deck to take along an esky and/or dry bag.  This gave me more than enough storage for a good day on the water.

Of course you don’t have multiple rod holders, storage etc like the bigger ‘hard body’ Mirage Drive Hobies do, but if you want/need them this can be catered for thanks to Hobie’s accessory range.   Yep rod holders, H-Crate Tackle storage modules, sounder mounts and a dozen more new fishing accessories are available once you work out what you need for your local waters.  Visit your local Hobie Dealer for more ideas...if you make it out in less than an hour you have more discipline than me!

WHO WILL THIS CRAFT BENEFIT?
The i11s is ideal for those who are short on storage space or transport space or otherwise need an inflatable.  Just a few of the places the new i11S works well include:

Various estuary lake and inshore fishing applications where you want to use a kayak, yet travel swift or  hands free.

Storable kayak tender for larger moored craft with the added benefit of small motor-like performance without the room and hassle needed to store and maintain fuel/batteries etc.

Small compact kayak/SUP for exploring/fishing shallows when anchored nearby in a larger boat.

When mum wants a SUP, and dad wants a mirage drive kayak.

Other applications we have yet to realize.

Conclusion:
The i11s is without question the ultimate craft for those needing a tough, capable and fast fishing inflatable kayak that can be packed up and stored inside a house and transported  inside a car, plane, or boat.  Need an inflatable?  This is the zippiest and one of the most versatile I’ve tested to date.

Footnote: We also had the Hobie Sportsman SUP along on the day (the Camo Colured Craft Pictured.  The Sportsman has a similar hull to the i11s but doesn’t have the Mirage Drive, seat and other features.  So if you just want a state of the art inflatable SUP the Sportsman is a good option.